OPP Trackdays is pleased to offer the opportunity to rent any of several motorcycles that have been fitted with aftermarket parts that OPPRacing.com proudly distributes. 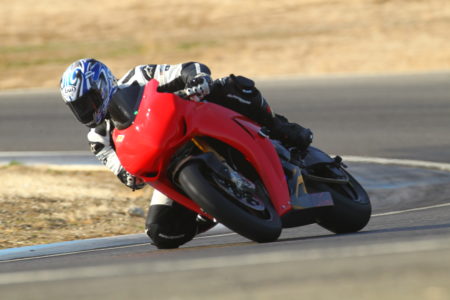 Titanium hardware was used extensively through out the bike like brake caliper bolts , disk bolts front and rear as well as frame bolts just to reduce a weight a little.
The airbox was removed and velocity stacks were installed with two K&N air-filters to make the beast breath a little more. The bike has a very distinctive sound definitely not a average Ducati Hypermotard. Rear wheel Dyno was impressive 110ph !
Driven sprockets 520 conversion were used front and rear, EK 520 blue chain holds it all together. CNC racing clutch plate was used and we also anodized the clutch basket blue to make it match. We also utilized CNC clutch slave and CNC racing rear sets ( heavily color modified) and with some Lightech rear set components. Among other things , the kick stand was powder coated blue as well as some little brackets on the engine to complete the theme.
Other mods. Integrated taillight , HID lights, Brisk spark plugs. This bike spends most of its time on the rear wheel and when its on track it definitely catches you off guard going by. Project concept was 1 month design and 3 months build time. This is not your ordinary Ducati Hypermotard and we are ok with that.

Life is all about style. This Ducati 848 Evo 2012 does not fall short on style or function.

This beauty was added to the stable to complement our older MV F4 1000RR ( currently with 3 miles on it. Yes that is correct 3 miles ! Just so it was not lonely. We added a stunning set of set of Carbon Fiber BST rims for starters. Brembo 19RCS Corsa Corta was added with Fullsix carbon fiber leaver guard. Samco Sport hoses were added to help cooling the bike down on track. Lightech rear sets were added to give better feel , improve foot grip and help in smooth shifting between gears. Bike comes with factory adjustable Ohlins front and rear suspension as well as adjustable Ohlins steering damper. Lightech Clutch guard was installed for safety reasons . Exhaust and few billet pieces coming soon.

Completely purpose built race bike . This is not your average Honda by anymeans. This bike was a bought brand new at Carter Honda in 2004 with the intenion of just adding a carbon fiber fender. Clearly things went terribly wrong !

If you ever wanted to experience what a Ducati 1199 can do this is the machine.

So fresh it only has 3 miles!

Rental Disclaimer
OPP Trackdays will only rent motorcycles to customers who are over 19 years old, hold a valid motorcycle license, have track riding experience and have motorcycle track riding school experience. All liability / damages are assumed by the person renting the motorcycles are 100% liable no exceptions.
(Proof Must be Provided )